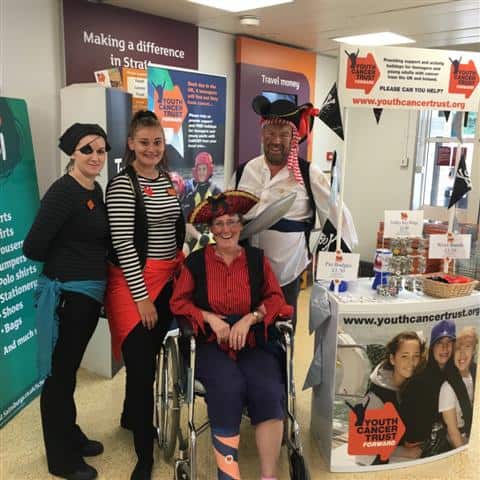 There were some very unseemly looking characters spotted at Sainsbury’s in Stratton this weekend! A gang of cut-throats, vagabonds and pirates invaded the store, plundering around £2,000 in treasure….and it was all legal and above board! The swashbuckling band of buccaneers were, in fact, representing Swindon’s Youth Cancer Trust, staging a weekend of pirate themed activity aimed a raising money in support of the charity’s aims, which centre around providing breaks for youngsters diagnosed with cancer at the YCT holiday home in Bournemouth.

Richard Searl, Community Fund Raising Manager for the charity, was captain of the unruly crew and delighted with the response of the store’s customers and colleagues. ‘Everyone got into the spirit of it,’ he enthused, ‘With several of the staff dressing up and children enjoying taking part in our colouring competition.’

For Sainsbury’s, Store Manager Val Atwill was quick to heap praise on the outlet’s new Local Charity of the Year. ‘This was our first big event with our new partners and, despite being hard work, it was loads of fun for everyone and extremely rewarding, particularly with the expected total from the weekend looking likely to top the £2,000 mark.’

A full year of activity is being planned by the two parties but, in the meantime, if anyone wishes to donate to Youth Cancer Trust, they are welcome to do so at any time in Sainsbury’s Stratton store.

The above picture shows Jenni Crocker and Sam Reynolds of Sainsbury’s, along with Richard Searl and Jean Sutcliffe from Youth Cancer Trust.

Tweet
Share
Pin it
Previous StoryGuest Blog: The Age Issues Within Cancer by Chris Lewis Next StoryResearch exploring the emotional impact of cancer…