Guest Blog: Life with a tumour- the good, the bad and the ugly by Sania Choudhry | Youth Cancer Trust

Guest Blog: Life with a tumour- the good, the bad and the ugly by Sania Choudhry 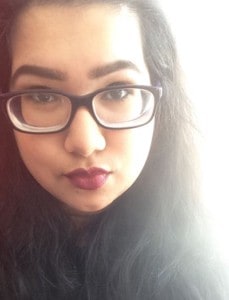 I have always wanted to write a blog post, albeit something a little more adventurous would have been a little better, but my choice in the matter is somewhat limited.  Anyways, here goes!

My name is Sania Choudhry and I live in Manchester, UK. I was diagnosed with a Craniopharyngioma (a pituitary tumour) at the age of 11 and have since been tossed in a hectic and unwanted tornado that is an inevitable side effect of any illness. Although my tumour was not cancerous or malignant, it still came with a long list of affects that ended up changing my entire life.

I was too young to fully comprehend the reality of the situation at the time but I knew something wasn’t quite right when my dad came out of the doctor’s room in tears. Little did I know that the following years of my life was going to consist of nothing more than excruciating pain, months confined to a single ward in a hospital (which in itself was rather nice) and praying that the end was not near. I went from being a healthy, happy and extremely passionate child to a depressed, empty child that wished for nothing more than a normal life.

At first, I was upset and angry that I had been made ill, that my life was impacted in such a horrible way and yet there were murderers and rapists out there roaming the streets happy and healthy. I went through operation after operation and even radiation treatment all for nothing; the tumour was aggressive and wouldn’t go down without a fight. I was losing. I could see the hope drain from the doctors eyes too as he sat down and told me I had a year or so to live. I saw my dad hold back sobs and clench his fists, all the anger building up inside him. And for the first time, I felt alone. I was ready to throw in the towel. I had faced too much and didn’t want to give my parents any more grief. So I decided to live out the rest of my months as quietly as possible; the little girl on the side who barely said a word. I didn’t want anyone to notice me or talk to me; I just wanted to be invisible. Everyone would have to get used to my absence so I thought it best this way. I remember the day I got really ill and was rushed to the hospital and hooked up to machines. I remember my parents crying and all my family stood around my bed. I remember whispering goodbye and my eyes closing, for what I thought would be the last time. And then I woke up a few days later. I felt… better. It felt strange, a new form of energy from within. Almost as if I had been given a new body. I remember calling out to my dad, who was asleep on the pull out sofa next to my bed. He looked tired and worn out. I remember how his face lit up as soon as he saw me. The doctors were amazed, my tumour had stopped growing and although I was still in hospital, I felt much more alive. I had been given a new chance at life and it changed everything. I was beginning to see things from a different viewpoint. I began talking to others on the ward, I realised that I was not alone. I saw lots of children, from the age of one to sixteen, all impacted by some form of illness yet there was one thing that we all had in common; we had each other. I saw young babies, who had been through numerous procedures, getting up and bouncing around in their cots, young children running around despite the horrid cannulas stuck in their arms, the nurses and doctors that cared and MY parents and my family who were by my side through it all. I got to know so many of the patients that I felt like the hospital was my second home and all of the people there, the nurses, the parents and every member of staff, became my family. Yes there were times when I wanted to give up and throw the towel in, but I didn’t. And I’m glad.

My journey to where I am today has not been easy, but through it all I realised many things and matured massively in comparison to others my age. I saw the world from a different perspective; one where I was not just some random child, but part of a family of people who were all fighting similar battles to myself. I have become stronger and closer to my family, even after losing my dad just less than two years ago. He gave me the strength and motivation to be who I am today and I will make sure I do him proud. And to all of those people out there who are suffering from an illness, be it physical or mental, all I want to say is stay strong. There is always someone out there experiencing something similar and I promise you, it WILL get better. Just keep on going.