My name is Dariusz and I live in Suffolk… 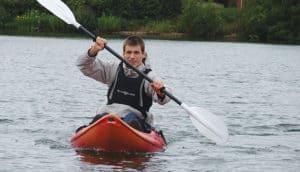 It’s a couple of years since it all started, but this is the first time I have decided to tell my story. I am a reserved person, so I have certain stories, which I do not share with anybody. Actually I am now changing this slowly. I hope that it will give courage to those in a similar situation, those who are struggling with cancer may find it reassuring that other people like me have been through a similar experience so they are not so alone.

It all started with a pain… pain down there. It wasn’t pain all the time, just sometimes. It was only a matter of time when I could feel the lump; I knew it was there under the skin, it wasn’t particularly visible. It felt strange, odd and different. I knew something was going on. I even went to the doctor; he tried to reassure me and said that I could have had it since birth. I wasn’t so convinced. He asked me to see him again in one month’s time. But I didn’t return. One whole year passed and the moments when it felt painful became more and more often and the lump also increased in size.

When I was 23 in 2010 – the breakthrough happened and I went to see a doctor – she couldn’t feel anything, but she sent me to a clinic for an ultrasound scan. During that time I told my father that I had some health problems. By the way he lives 1000 miles away, but was still such a great support. I wasn’t scared, simply relieved – that I didn’t have to wait any longer and that I had finally taken action and had hopefully given myself a chance to survive. From then on I did not step away from that path – the path I called ‘survival’. I remember the look on the face of the doctor during the ultrasound scan. He was explaining to me where the tumour was, his face was so serious. Instead of feeling down and haunted by the results, I felt surprisingly alright, strong and ready to face the hospital and seeing the doctors by myself, of not hiding it anymore and of caring for my health. I wasn’t afraid. I was quickly informed about the operation – I was going to be a patient. Me? I hardly ever visited hospital and had never stayed overnight there. The unknown did bother me. What was my score, I was wondering? Am I going to live, for how long? The biopsy was done and the results: a malignant tumour.

The cancer cells do not die by themselves as they haven’t got a switch off mechanism, they just reproduce. They are rebellious cells within the body, but working against it and if not stopped in time, as we all know, can be fatally dangerous. My lymph nodes in the groin area were a big mystery – were they enlarged due to fighting the cancer or just another affected party – death ally of the rebellious outcasts. The operation to remove the tumour made me weak, it took time before I could walk normally again. The chemotherapy followed… I was now feeling close to writing myself off, close to giving up, to not even try to fight anymore, but I kept going and survived. Some people say it was a miracle.

And what’s more – it made me stronger. It was nice to have some of my close friends around. Some of them were praying for me and caring, others tried to make me laugh. Surgery and stitches means NO NO to laughing! They helped me through the most serious part of my life so far.

The good part of it was that I was then told I could go for a sponsored holiday. I thought: Let’s do it! Before I realised I was in a house in Bournemouth with a group of other people just like me. Finally I didn’t feel that ‘different’. No longer was I feeling like one from the back of the crowd, as unable, inadequate.

I can easily divide my life from before big C and after it. Seeing my life as a countdown to the inevitable and then a new life. Before long I was feeling nearly back to normal and sending off applications to local schools, pursuing my goals and following my dreams. The cancer experience had made me stronger. I had been given a new life. I wanted to use it, to thank my creator for such a gift.

This last story is the most emotional part for me… my relationship. The girl I was with during my illness was the centre of my world, but she had grown distant. I struggled to forgive her as I was already suffering greatly without losing her as well.

During this time I decided to go on Youth Cancer Trust holidays. She did not come with me there – she never did. We were already two very separate human beings.

Instead of crying in silence I opened myself (a bit) to the new people I met at the Youth Cancer Trust house.

The many activities drew my attention away. I met some new people and realised that I am not in the worst possible situation. My stay there helped me to realise that life is not just about her. That to live and share life with people who understand is of the most importance. Recovery takes time, both physically and emotionally. The support given to me at YCT by the members of staff has made me a richer man. The increase of self-esteem is priceless.

I have spent a few times at the lovely Tracy Ann House, home of the Youth Cancer Trust and I will always keep good memories from the holidays there. I have now completed my degree and looking forward to the next time I can go to YCT. I appreciate the true value of friendship and try not to look back to the past. I have got only one life: I can either use it or lose it.