Liam, now 28, was diagnosed with a benign brain tumour at the age of 10. He had an operation to try to remove it but due it being located in the centre of his brain by the pituitary and hypothalamus glands it was too dangerous to operate.

“I had radiotherapy for 6 weeks and they put in a shunt to drain the fluid away. In 2003 I had more treatment to stop it growing. This time is was chemotherapy, the same sort of treatment they give for a non-benign tumour. 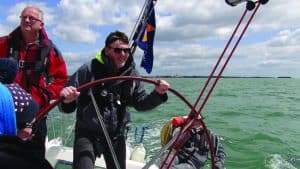 In 2006, the tumour went cystic so they had to operate to put in a reservoir. This time my brain had had enough and shut down. This meant that I then had to learn how to walk again and remember who my mum was. It was hard.”
Liam has been left with partial vision on his left eye and has to take hydrocortisone, growth hormones, testosterone and thyroid hormones.

“I first visited Youth Cancer Trust in 2012. I found out about it in hospital as I was looking for somewhere to go that took young people having been to other camps that were just for children. I was a bit nervous the first time but met some new people and really enjoyed the activities. My favourite activities are go karting, but I’m not very good at it and arts and crafts. I’ve since been 5 times!

I also met Warren through another friend on Facebook, who has exactly the same tumour as me and was born on the same day – my ‘astro twin’.
Liam now lives in a supported living residence, which is based on the Steiner School ethos.

“I live in a shared house with 4 other people and I do theatre on a Monday and Tuesday, arts and crafts on a Thursday when I do my comic books and Friday I am in the bakery. Once a week on a Wednesday I go to a special needs project where I do arts and crafts and street dance. I also do a small assembly job, which includes making bug kits for schools and hospitals.
My mum lives close by and I also have two sisters, Chloe and Rosie. Rosie has been with me to Youth Cancer Trust. My tumour has not changed or grown since 2013, which is good news. I have scans every year.”

Liam hopes to one day have his own place so he can become more independent.